The Extinction of Discernment 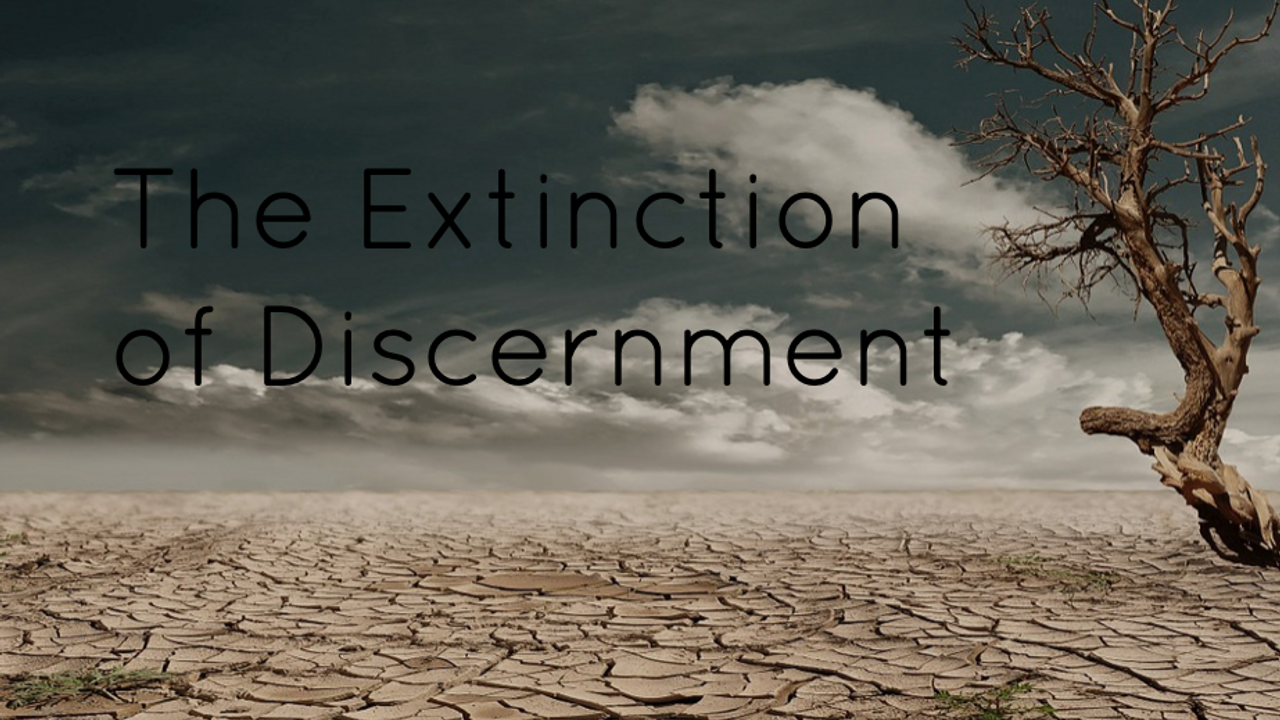 Along with the dodo, the Tasmanian tiger, the wooly mammoth, and the passenger pigeon, here’s another item to add to the extinction list: discernment.

What is discernment? It is the ability to sense, grasp, and comprehend obscure ideas. It is the ability to think critically about something, to navigate the subtleties of right, wrong, and almost-right. It is not a blind intake or rejection of information, but rather a thoughtful chewing on each piece of information, perceiving how it fits with, conflicts with, or expands on what is true for you.

Discernment is an art. Well, it was an art - before it went extinct and disappeared from the face of the earth about two years ago.

What caused the extinction of discernment? We could say that it was a loss of habitat.

You see, discernment can only live in an open human heart. A closed heart is not suitable for discernment to survive.

There were four factors that led to the closure of the human heart:

And what happens next is what really killed the discernment. The next phase is what tracked, hunted down, and finished off the last remaining discernment.

See, community gets built around the aggression. It’s a false community because it is closed-hearted, rather than open-hearted - which is what is necessary for real community. But it resembles connection. In its twisted way, this aggression builds twisted community which fills the need for connection - one of the most basic human needs.

Thus the closed human heart finds a false sense of community with other closed hearts. It’s not real connection, but it beats the free-floating anxiety.

These four factors led into each other and combined to close the human heart. Almost permanently.

With a lack of discernment, other more invasive species moved in, destroying the closed hearts. These are:

Judgement: Closed hearts see in black/white, right/wrong, for/against, either/or. There is no grey, no colour, and no middle/higher ground.

Gullibility: Information that supports and bolsters aggression towards the object of anxiety is absorbed blindly - robotically.

Hostility: Any other information is rejected, squashed, and eradicated. There is no way to access the closed heart as it is so heavily armoured.

Exclusiveness: other people who have the same object of anxiety are accepted and welcomed while other people are unwelcome, unacceptable, and unworthy.

So, discernment is extinct. But can we bring it back? Can we bring back wisdom, tact, maturity, clarity, and critical thinking?

The dodo, the Tasmanian tiger, the passenger pigeon, and the wooly mammoth, might only be found in dusty old books, but I refuse to believe that discernment is gone for good.

Unlike the other extinct species, discernment can return. Every human heart that re-opens makes room for discernment to settle again.

Each human heart that finds inner peace provides a space for discernment to make its home.

Every human heart that brings meaning and significance to life nourishes discernment.

Every human heart that seeks true connection, vulnerability, intimacy, relationship, and real community allows the discernment to grow and multiply.

Discernment may be extinct, but it can make a comeback within my heart and yours.

Around what issue is your heart closed, effectively killing discernment?

How can you re-open your heart to provide a habitat for discernment to thrive once again?

What would be different for you if discernment could live in your heart once again?