Lessons from the Horses 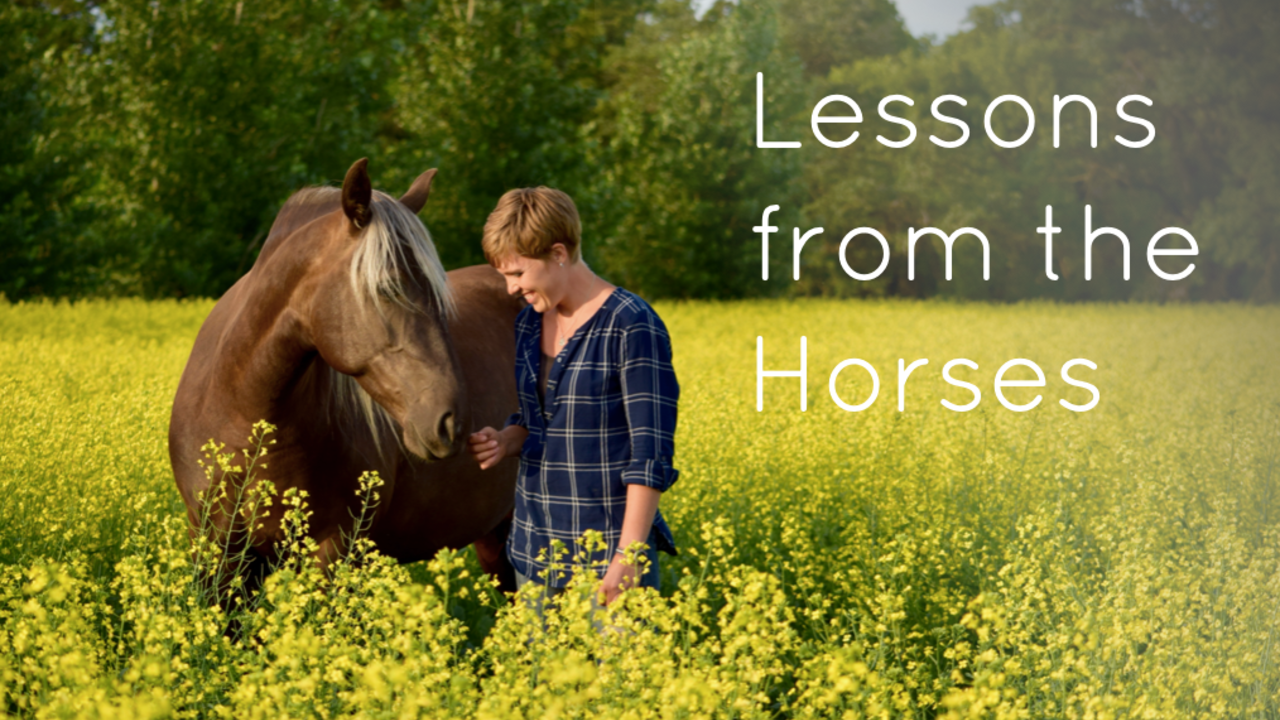 I’ve been partnering with my horses for coaching and I have to say the experiences and lessons that take place in that arena are almost unbelievable! Occasionally, I’d like to share some of them with you. I’d like to introduce you to my equine partner, Kali, and her client, a young man ready for a lesson in confidence.

The young man was unconfident.

She walked all over him.

The space? It was hers.

The food on the ground? Hers.

The ground he was standing on? Also hers.

“Tell her to leave that food alone,” I encouraged him. “It’s your food, after all.” I was talking about the tub of hay cubes on the ground. The horse treats were meant to belong to the young man. They were his property. But Kali was chowing down on them, oblivious.

He moved towards the dark horse, crowding her, obeying the only rule - that was to not touch her.

He waved his arms a bit.

If I’ve ever seen a horse ignore someone, it was right there and then with this young man.

He tried again. First, he backed up bit, and then pushed himself into her space, simply by his physical presence making it impossible for her to eat. As she moved over, there was a glimmer of hope, but it was gone when she resumed eating. Frustration seeped into his body language as he again stepped into her.

This time his shoulders slumped in defeat.

I called him over and with a gentle smile asked how it went. He laughed and said that he felt invisible, and found it really frustrating.

I asked him, “How did that frustration affect you?”

“Is that a familiar pattern for you? To get frustrated and then give up?”

“Yeah, all the time,” he admitted.

“Is there another way that others express frustration?” I asked.

Again, he could relate. “For sure, there’s people I know who get frustrated and then get angry, like explosive.”

“Okay, so there’s basically two ends of the spectrum…on one end there’s anger and on the other, there’s giving up. Do either of them build relationship?” I gestured to Kali who was still eating, but I was referring to so much more.

Gazing at Kali, he replied, “No. Never.”

“Right. So is there anywhere on that scale between being angry and giving in that we would want to be?”

He considered it. I could see him mentally explore the scale that we had described. Then he shook his head, his eyes widening a bit at his own discovery, “No,” he said.

“Exactly. I don’t want to be anywhere on the scale between angry and giving up. That scale kinda sucks!” I laughed.

But he was thinking about Kali. “So how can I move her without getting on that scale at all?”

I just about started to blurt out a mile-long response, but bit my tongue. “What do you think?” I asked him instead.

His response took a few moments to come, but when it did, it was a thousand times more profound than I could’ve expressed. He tilted his head at me, squinted his eyes in thought, and said, “I have to crank the volume on composure.”

“Heck yes.” That’s all I could say. And I gestured toward Kali.

He took the invitation.

Raising his head, squaring his shoulders, and with the calmest expression I’ve seen, he walked toward Kali. Immediately, she felt the difference in the young man, as her ears swivelled toward him, watching him approach while still eating.

The confidence in the young man’s body language, energy, and tone could never have been confused with anger, aggression or any other domineering emotion. It was pure joyful confidence.

Without a second thought, Kali picked up her head out of the young man’s food bowl and followed his polite request to leave his treats alone. Calmly, without hurt feelings she left the food. A huge smile swept across his face, as he began his return towards me.

But Kali wasn’t done. A few feet away she stopped and turned to face this new presence in the arena. She glanced at the food tub, now left unguarded and inviting. But instead of going for the treats, she chose to be with the young man and walked to join him.

His eyes were shining from the light within him as Kali stood calmly at his side enjoying his company.

“So, I guess, when I crank the volume on composure, I can be confident without getting angry and without giving up. And it actually builds the relationship, not damages it.”

Kali let out a big sigh.

The horses have something to tell you. Discover it through The Equine Experience.

Bored? Here's What to Do.
3 SPECIFIC Ways to Improve Mental Wellness
My Theme Word
Close